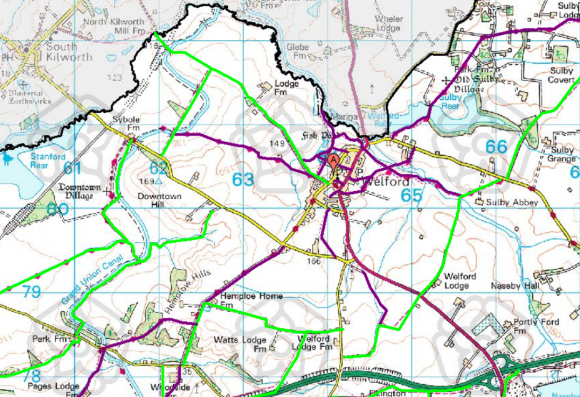 Details of the Rights of way, which passes through Welford, can be found on the Northampton County Council website here. A leaflet has also been produced as a guide to the Countryside Code.

Walks from the Wharf

The Welford and Its Canal Project together with organisations such as British Waterways (now the Canal and Rivers Trust) produced a good leaflet of walks from the Wharf, which is available to view here.

There are also a number of significant walks which pass through Welford:

Hobblers Way (Coast to Coast - Wash to Severn) 311 km / 193 miles
LeicestershireLincolnshireNorthamptonshireOxfordshireS GloucestershireWiltshire
The Hobblers Way is a 193 mile walk from the River Nene in the East to the Seven Bridge in the West. Running diagonally across the country though Lincolnshire, Along the Northern edge of Northamptonshire where it broadly follows the Jurassic Way, briefly touching upon Leicestershire , then on into Oxfordshire and making use of the Century Way, before heading further South West touching upon the Macmillan Way through Wiltshire and into Avon.

Market Harborough Round 114 km / 71 miles
Leicestershire, Northamptonshire
A circular tour through many of the small villages that surround Market Harborough in Leicestershire. The route takes advantage of fine views, as well as places of historical and cultural interest. It starts in Hallaton and describes an anti-clockwise course taking in Houghton on the Hill, West Haddon, Coton and Stoke Albany as well as visiting Foxton Locks and Naseby Battle Field.

Jurassic Way
142 km / 88 miles
Lincolnshire, Northamptonshire, Oxfordshire, Rutland
The Way follows the band of Jurassic Limestone that runs along the northern boundary of Northamptonshire going first along the Oxford Canal and then via Middleton Cheney and Woodford Halse to Braunston on the Grand Union Canal. Here it turns to pass between Market Harborough and Corby, following the Welland Valley to Rockingham with its castle.

Shakespeare's Avon Way 148 km / 92 miles
Gloucestershire, Northamptonshire, Warwickshire, Worcestershire
Shakespeare's Avon Way Association, who are behind the Macmillan Ways and Shakespeare's Way, have another long distance path – Shakespeare's Avon Way - which follows the course of the River Avon as closely as possible using existing public footpaths, bridleways and a few minor roads, from its source at Naseby to its confluence with the Severn at Tewkesbury. The main towns it passes through are Warwick, Stratford upon Avon and Evesham. Naseby, Tewkesbury and Evesham were the sites of decisive battles. Tewkesbury, Pershore and Evesham have historic abbeys and Warwick and Kenilworth castles. Bredon Hill, visible from the later stages of the path, is visited by a detour.